0 0 8 0 291
@ecoman
Posted 2019-04-14 22:05:01
The History Of Earth
Part 7
The Luciferian Rebellion
As the vibration dropped on Earth many other star systems came to incarnate most of them in the fourth density. Earth became a blend of many races and the Orion’s began to dominate. Unlike the Draco’s the Original on’s were able to land directly on the Earth in addition to come through the incarnation process. So their numbers dramatically increased much more than the Draco’s.
The Draco’s Reptilian bodies had a very hard time adjusting to Earth’s atmosphere and gravity. The Pleiadians watched with dismay at what was happening but they were not allowed at this time to interfere. It was like them watching their specimen go out of control and not being able to contain it. They weren’t happy.
A group of archangels and ascended masters from 7th, 8th and 9th density were also watching Earth. Archangel Michael and an ascended being which later named Lucifer.

Lucifer devised a plan to lessen the chaos on Earth by teaching Earth’s souls to control their emotions and become more aware of their intellectual abilities so they wouldn’t be so easily swayed by the negative factions. A group of souls came to Earth to help Lucifer train the beings of Earth to be able to control their emotions. The plan backfired!
As the souls began to suppress their emotion the souls became more fragmented until their vibration dropped below 4th density into 3rd density. Sounding familiar 3D humans?
Suppressing any part of the self decreases your power and awareness... not good!
The shaming of emotion in men, the Victorian suppression of sexual desire all have their origins in lucifers philosophy. Archangel Michael seeing what was happening on Earth could no longer sit by and watch what was happening. Archangel Michael had a group that decided to drop their vibration and incarnate to Earth. This was all planned to raise the vibration of the souls here on Earth once again.
Once Archangel Michael and his group were incarnated on Earth they begin to see the evil that has plagued this planet and decided to do something about it. Michael took the polarity of the light and the Draco took the polarity side of the dark. Hence, duality. 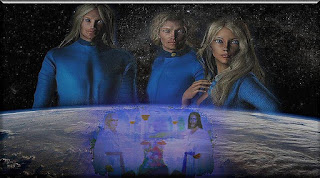